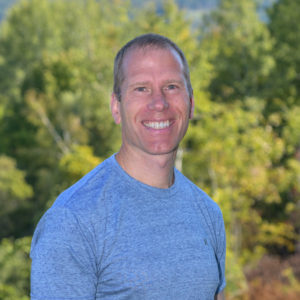 Dr. Jones practices primary care optometry including adult and pediatric eye exams, vision therapy, ocular disease including glaucoma and dry eye treatment, as well as co-management of pre-op/post-op laser vision correction. He is president of the White River Lions Club and served as a board member of the Vermont Optometric Association from 1998 to 2008. He has been a member of the American Optometric Association since 1990.

Dr. Jones graduated from Hartford High School, White River Junction, in 1985. He went on to receive a Bachelor of Science degree from Saint Michael’s College in Colchester Park, VT in 1989. He earned his optometry degree from the New England College of Optometry in Boston, MA in 1994 and soon after began working in the Upper Valley with his father, Dr. Reginald Jones, at Jones Family Eyecare located in White River Junction and Bradford, VT. In 1993 he merged his White River practice with his wife’s business and worked at White River Family Eyecare. Valley Vision Eyecare opened for business 5/2017.  He resides in White River Junction with his wife Dr. Sheila Hastie, daughter Sarah, and son Nicholas. He enjoys skiing, mountain biking, motorcycles and dirt bikes, and sugaring.

You can schedule your next appointment with us online!

Let's continue the conversation over on your social network of choice.

Leave Us a Review

Please take a moment and let us know how your experience was.